What Should I Do with My Yogurt Cup? (part 1) 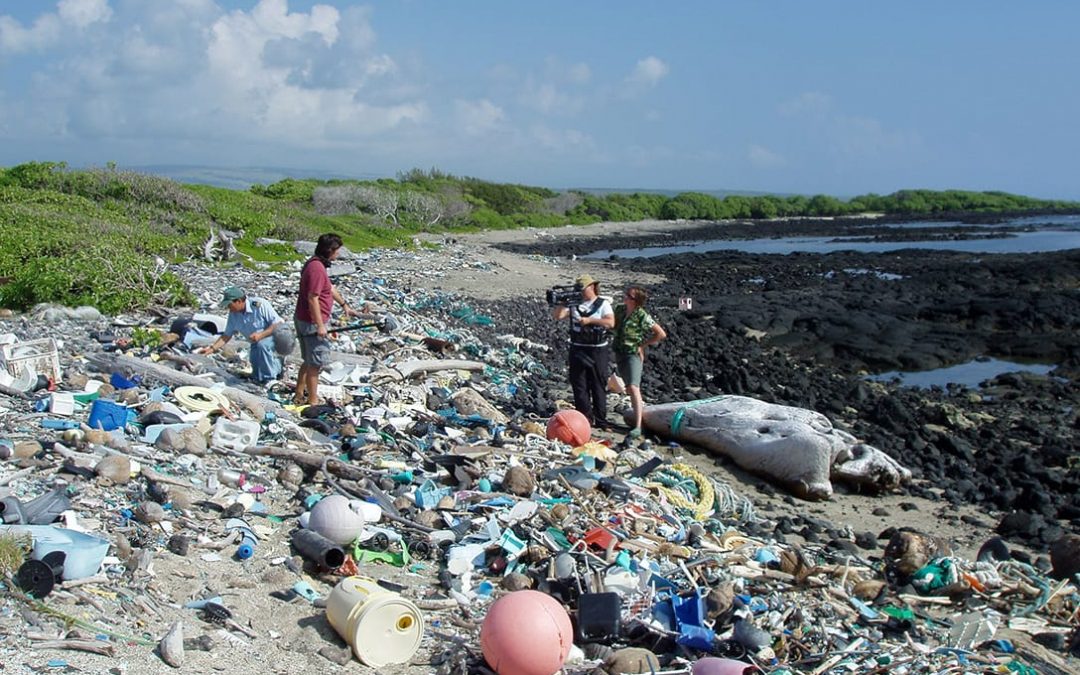 In the middle of the Pacific Ocean, between San Francisco and Hawaii, is an area roughly 4 times the size of California that contains approximately 1.8 trillion pieces of trash weighing 80,000 metric tons. This area is known as the Great Pacific Garbage Patch (GPGP). It covers 618,000 square miles and is growing.  The trash collects in the area because of a meteorological phenomenon called the North Pacific Gyre, which is a system of circulating currents in the ocean. From time to time, the ocean currents can cause the area to spit out some of the debris, much of which accumulates on the beaches in the Hawaiian Islands.

Most of what accumulates in the GPGP is plastic. The reason for this is twofold. The first is the overwhelming use of plastics for almost everything. The second is that plastic does not biodegrade. If I drop a piece of wood or a paperback book into the ocean, it will float for a while, then sink to the bottom and rot. If I drop a metal cup, the same thing will happen, but it will take a bit longer. But if I drop a plastic water bottle, it will be there, in some form, for centuries, maybe even millennia. But, here’s the really big problem. Exposure to the sun’s UV rays and the sea environment cause the plastic to break up into smaller and smaller pieces.  These tiny pieces make up the majority of the GPGP, creating a toxic “plastic soup.”  What’s worse is that marine wildlife mistake these small particles for food and eat them.  Experts say that 90% of all seabirds have plastic in their bodies, and that plastic will outweigh fish in the ocean by 2050.  In addition, studies have found that plastics attract and accumulate persistent organic pollutants (POPs) such as carcinogenic and endocrine-disrupting polychlorinated biphenyls (PCBs), polycyclic aromatic hydrocarbons (PAHs), and organochlorine pesticides such as DDD, a derivative of DDT. These POPs, when consumed by fish and other marine animals, endanger both the animals that ingest them and others higher up the food chain, including humans and especially human babies.

So, where does all that trash come from?  The really short answer is “us.” From water bottles dropped on the beach, plastic beach toys swept out with the tide, various small “disposable” items that get washed into storm sewers, fishing nets lost at sea, stuff swept off decks of ships or intentionally dumped. It goes on and on.  It is estimated that 80% percent comes from land-based activities in North America and Asia. The remaining 20 percent comes from boaters, offshore oil rigs, and large cargo ships that dump or lose debris directly into the water.  The GPGP is the largest dump in the world. But it’s not the only one. Numerous other ocean gyres where garbage is concentrated have been identified around the globe. And it’s not all concentrated.  It has been estimated that every square mile of ocean contains 46,000 pieces of floating plastic, and in some areas, the amount of plastic outweighs the amount of plankton by six times. Of the more than 300 million tons of plastic produced each year, about 10 percent ends up in the ocean. That’s 30 million tons.

50% of the 300 million tons of plastic produced in the world every year is what is known as “single use plastic,” used for only a short time, but lasting in the environment for hundreds (maybe thousands) of years. Immediately we think of plastic water bottles. But that’s not all–  sandwich bags, cling film, milk jugs, yogurt containers, cottage cheese containers, candy wrappers, cookie packages, drinking straws, chip bags, bread bags, produce bags; the plastic bags we take home from grocery stores, department stores, restaurants and hardware stores; laundry detergent bottles, fabric softener, bleach, household cleaners, dishwashing liquid, bottles with oil, vinegar, mayonnaise, mustard, catsup, juice, peanut butter, maple syrup. The co-op grocery in my neighborhood where I shop has a large bulk section, and I generally have felt pretty smug about buying a lot of staples and spices in bulk. But guess what? I bring everything home in a plastic bag, empty that bag into the jars in my pantry and throw the bag away!  (I have, by the way, stopped doing that.)

But the list goes on—every bottle of shampoo, conditioner, shower gel, hand soap and hand lotion, every tube of toothpaste, every tube of deodorant, every bottle of vitamins, nutrition supplements, all those annoying-to-open prescription pill bottles. It’s endless. Even a lot of our clothes are made of plastic, which is what polyester is.  And, of course, there is the slight problem that all plastic is made from oil, which is not endless, and causes all sorts of other problems.

Hold on, you say. Isn’t a lot of that recyclable? Some is and some isn’t.  But there’s a big gap between being recyclable and being recycled.  Mass production of plastic began in the 1950s, only 6 decades ago. In that 60 years, the world has produced 8.3 billion metric tons of plastic (that’s 18.3 trillion pounds!). Of that, only 9% has been recycled.  Most of it—79 percent—is accumulating in landfills or making its way into the natural environment as litter.  Much of it will end up in the oceans. And it’s not as if we are slowing down.  So far, plastic manufacturing has doubled every 15 years. And half of all the plastic manufactured becomes trash in less than a year, in spite of nearly ubiquitous recycling programs!  Why?   We’ll take a look at recycling in part 2 of “What Should I Do with My Yogurt Cup?”