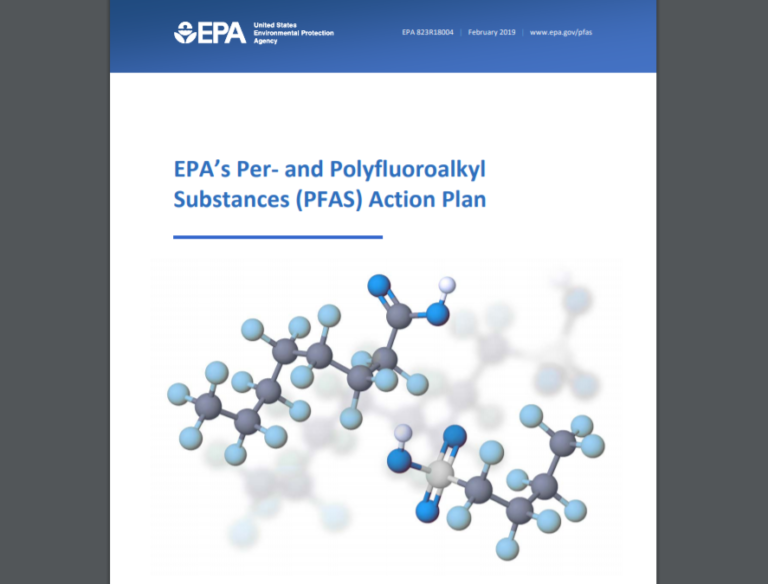 Chemicals appear on and in many everyday items such as rugs, detergent, paper cups and shampoo. Additionally, with the wide spread use of fertilizers and insecticides, water systems are constantly fighting to prevent or reduce chemical contamination. While the contamination of our water ways by pharmaceuticals is making news headlines, there is another class of chemicals, Per- and Polyfluoroalkyl Substances (PFAS), that impact most of the United States population yet receive very little media attention.

PFAS chemicals are used as nonstick compounds in a plethora of everyday items because they repel water and oil. These substances act as coatings to protect goods from stains, corrosion, and water. These chemicals were invented in the 1930’s and have been used commercially since the 1950’s. They were initially used in Teflon products, but there are now thousands of variants used in a wide variety of consumer products including carpets, clothing, non-stick pans, paints, food packaging, etc. PFAS chemicals are prevalent in the environment today because they are very stable chemicals and do not readily breakdown.

The toxicity of PFAS can vary depending on the chemical make-up. The most commonly found and studied PFAS chemicals are perfluorooctanoic acid (PFOA) and perfluorooctanesulfonic acid (PFOS). U.S. manufacturers phased out PFOS in 2002 and PFOA in 2013. However, manufacturers continue production with other PFAS chemicals. Scientists are still learning about the health effects of exposure to these substances, and there is not enough known about other PFAS forms for them to be truly considered safe. Since manufacturers phased out PFOA and PFOS, the Centers for Disease Control and Prevention (CDC) has seen a decrease of these compounds in the human body. However, the chemicals do remain in the body years after exposure and remain in the environment even longer.

The health impacts of PFAS on wildlife is not yet known, but high levels have been found in many species including fish and deer. Some states have issued “do not eat” advisories in areas where PFAS pollution is known to be high. Wildlife ingest PFAS chemicals in ways similar to humans. Materials with the chemicals on them are often disposed of in landfills and sewage treatment systems. Through these locations and storm water the chemicals can easily seep into soil, waterways, and groundwater. Some are even incinerated and can become a component of air pollution. Large amounts also enter the environment from fire-fighting foam and sprays used at military bases and airports.

It seems likely that setting maximum levels for PFAS chemicals in drinking water nationwide is the only way to stop contamination and hold polluting parities responsible. The EPA currently has no Maximum Contaminant Levels (MCL) for PFAS chemicals, although the agency did issue a health advisory for PFOA and PFOS. Most states are waiting for the EPA to create stricter regulations. However, Vermont, New Jersey, and New York are implementing extremely stringent standards, as low as an MCL of 10 parts per trillion for both PFOA and PFOS in New York.

Due to public and scientific concern as well as upcoming regulation, the EPA released an action plan in February 2019 to help states, tribes and communities address PFAS chemicals. The goal of the plan is to provide both short-term solutions and long-term strategies. The agency plans to provide a multi-media, multi-program, national research and research communication plan to deal with the emerging environmental crisis. The EPA is also continuing to research PFAS chemicals to improve detection and measurement methods as well as better understand the transport of the chemicals and their potential toxicity.

Additionally, the EPA is moving forward with the MCL process for PFOA and PFOS, and more PFAS chemicals may be regulated as more information is gathered and evaluated. The EPA has also designated PFOA and PFOS as hazardous substances, a move which will allow states to hold polluting parties responsible and accountable for this contamination. In addition, the agency may add PFAS chemicals to the Toxics Release Inventory, thereby prohibiting certain PFAS chemicals. If PFAS chemicals are on the Toxics Release Inventory, then certain industrial sectors and federal facilities would have to report PFAS releases.

Drinking water systems should begin planning how they will monitor and prevent PFAS contamination in their systems, because it is no longer a question of whether new regulations will be enacted but when.